Reduce, reuse and recycle for a green cash cycle

Central banks have the opportunity to reduce greenhouse gas emissions, water usage and other environmental impacts through their currency strategy. How? The principles are simpler than you may think.

Banknotes can be thought about in the same way that we tackle all products: reduce, reuse, recycle.

CCL Secure’s Technical Services Manager, Lachlan McDonald, said that being green does not have to be rocket science.

“As GUARDIAN polymer is a stronger substrate, less notes are required. This means drastically reduced production volumes, typically by a factor of three to five times in comparison to paper,” he said.

“Combine lower production volumes with less transport and the capability for recycling, and you have a winning formula for reducing greenhouse gas emissions.”

Sustainability and durability go hand in hand. Banknotes on polymer substrate last longer in the cash cycle than any other material, meaning less production is required.

The Banco Central de Costa Rica was able to drastically improve note life after introducing GUARDIAN polymer in 2010. The life of the ₡1000 banknote went from less than 12 months using cotton-paper, to up to 64 months with GUARDIAN polymer.

Mr McDonald said: “Think about the benefits if your banknotes last five times longer. It means you need to order five times less banknotes, which leads to a huge reduction in raw materials, energy and transportation.” 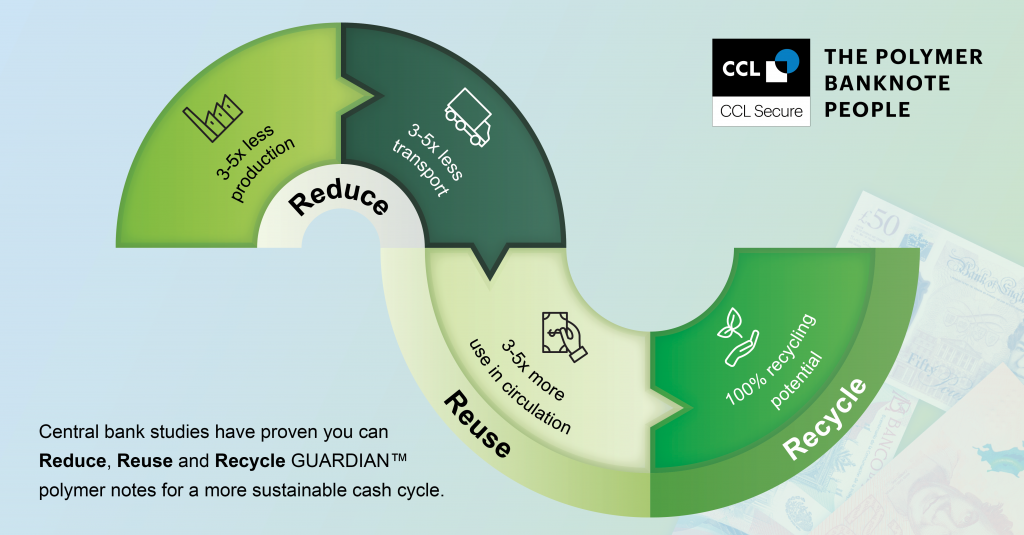 A polymer banknote is the ultimate “multi-use” plastic product.

They are reused a multitude of times by the public, institutions and machines. GUARDIAN polymer banknotes can be used around three to five times longer in circulation than their cotton-paper counterparts, with less damage occurring from things such as rips or water.

Banknotes are also heavily controlled throughout their life cycle. They are sent back to the central bank when they are unfit for use, rather than ending up littered like single-use plastics.

Polymer is the only substrate that has a genuine recycling process. Product and life cycle analyses have proven that recycling has a positive impact on greenhouse gas emissions.

Currently, around 80% of GUARDIAN banknotes are being recycled – a number which is climbing every day.

Banknotes that use cotton-paper or cotton-plastic-laminates cannot currently be recycled in significant volumes, often ending up in landfill or being incinerated. Though the heat from the incineration process might be used as thermal energy, this end-of-life treatment still results in significant carbon emissions. The same is true for composting paper banknotes, which is also a carbon-intense process. The option of composting is not available for cotton-plastic-laminates, so such notes have to be burned or tossed in landfill.

CCL Secure has been supporting the recycling of polymer for over 15 years. Its recycling program has been hailed by industry as instrumental in the progress towards a greener cash cycle, winning a Central Banking Award in 2021.

CCL Secure has established both a global network of specialist recycling facilities and invested in its own facilities, offering an end-to-end service.

At these facilities, shredded banknotes are treated to neutralise the inks and then processed into pellets. The pellets are sold to manufacturers who bring new life to the polymer, creating products ranging from furniture to building materials and playground equipment.

In Mexico, a Life Cycle Assessment (LCA) in 2018 found the production and distribution of the Banco de Mexico’s GUARDIAN polymer banknotes resulted in a 48.8% reduction in greenhouse gases, compared to cotton-paper banknotes. Mexico is one of many countries where all polymer banknotes are recycled, including Australia, Canada, Costa Rica, England and New Zealand.

“Polymer is the solution for central banks to meaningfully minimise their carbon footprints. We have been advising banks and other stakeholders for over three decades to help them make this a reality,” he said.

“While suppliers of other substrates are taking steps to make their products greener, we know that polymer is proven to be the most sustainable option now. Only with polymer can central banks reduce, reuse and recycle across the cash cycle.

“Many nations are moving away from cotton-paper or mixed substrates to polymer – and for good reason. Mauritania made the switch from its previous paper-plastic-laminate to GUARDIAN polymer for its full series, and we’ve seen recent announcements from Philippines, Thailand and Guyana who are changing their notes from paper to polymer.”

“Given increasing scarcity of water, energy and other inputs, the production of our banknotes can be made more sustainable… These concerns prompted the BSP to consider improving the current banknotes’ material and performance,” the BSP said.