The new note, which came into circulation in November 2021, will be used concurrently with the 20 Ouguiya coin that was introduced in 2018.

The bank’s existing family of notes already use GUARDIAN and the new note complements the design and size of the other notes. Security features that are already familiar to Mauritanians have been incorporated into the design, which includes landmarks that are of both national and international importance.

One side of the note features the Great Mosque of Gataga in Kaédi – in the south of the country – which dates from around 1366 AH, and is one of the country’s oldest mosques. The Sudano-Sahelian architecture is found in many old Islamic cities in sub-Saharan Africa. 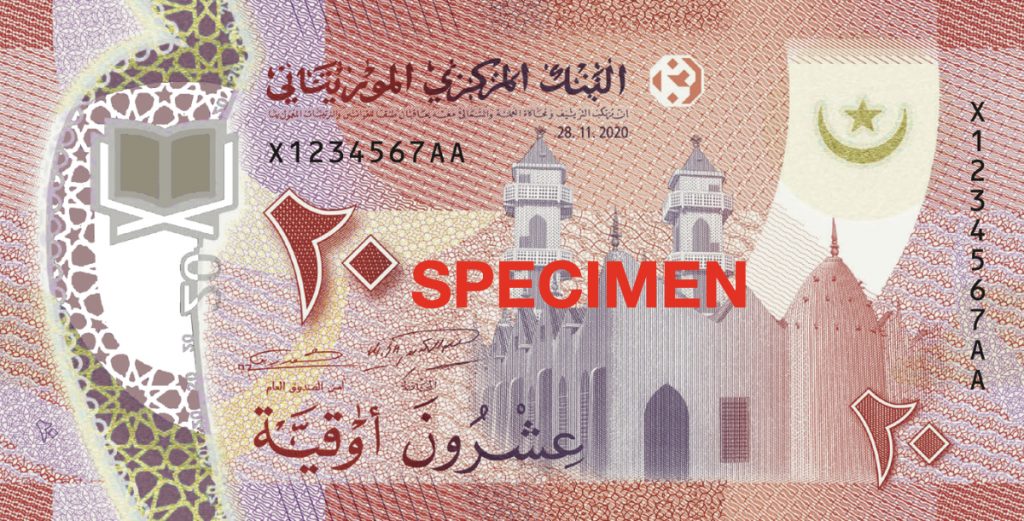 The other side of the note features the geological wonder of Guelb Errichât – also known around the world as the “eye of Africa”.

“Given the importance of this note and to highlight the elements of design that it contains, it was decided to keep the banknote the same size as the 50 Ouguiya, as well as retain some elements that enhance security,” said the bank in a press release on their website.

Security features include AURORA™ in the main window – a combination of two-colour switching inks used in the book and Islamic pattern. There is also a METALIX™ Gold in the background of the main window and in a half window that displays a crescent and a star.

“We’re delighted to have worked closely with the Central Bank of Mauritania and their printing partner Canadian Bank Note Company on this latest addition to their family of banknotes to use GUARDIAN polymer substrate,” says, CCL Secure’s Director of R&D, Marketing and Design, Dr. Tim Berridge.