It’s Official. CCL Secure Is A Great Place To Work

Our facilities in Wigton, Cumbria, has been named as one of the 2021 UK’s Best Workplaces™ rankings, out of hundreds of companies who were also considered for the award.  The independently assessed rankings are awarded annually. 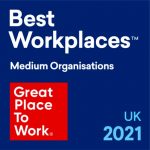 CCL Secure’s Wigton facilities were placed in the Medium sized business category and will feature in special reports in both the Guardian and the Daily Telegraph.

The next generation of £20 notes will also be mostly made from GUARDIAN polymer made in Wigton. CCL Secure won the tender to supply the polymer for the majority of the third release of £20 notes by the Bank of England. More than 5 billion GUARDIAN polymer banknotes have been issued by the Bank, including all of the launch volumes for the £5 and £10 notes, the majority of £20 notes, and most of the latest £50 note. There are 2.2 billion £20 notes in circulation, or around half of the total of all denominations issued by the Bank.