Banco de México’s new 50-peso banknote – issued on 28th October 2021 – is the latest in a series of GUARDIAN™ polymer banknotes issued in the bank’s G-family of notes.

The front of the new $50 note shows the foundation of Tenochtitlan the capital of the Aztec empire. According to legend, the city was established by the Mexica tribe in the place where they found an eagle devouring a snake. This image is also depicted in the front of the note. The main motif of the back of the note is the “ajolote” a salamander found in several Mexican lakes and waterways, such as Xochimilco, which is also depicted as part of its habitat. This salamander is notable among amphibians because they reach adulthood without undergoing metamorphosis. 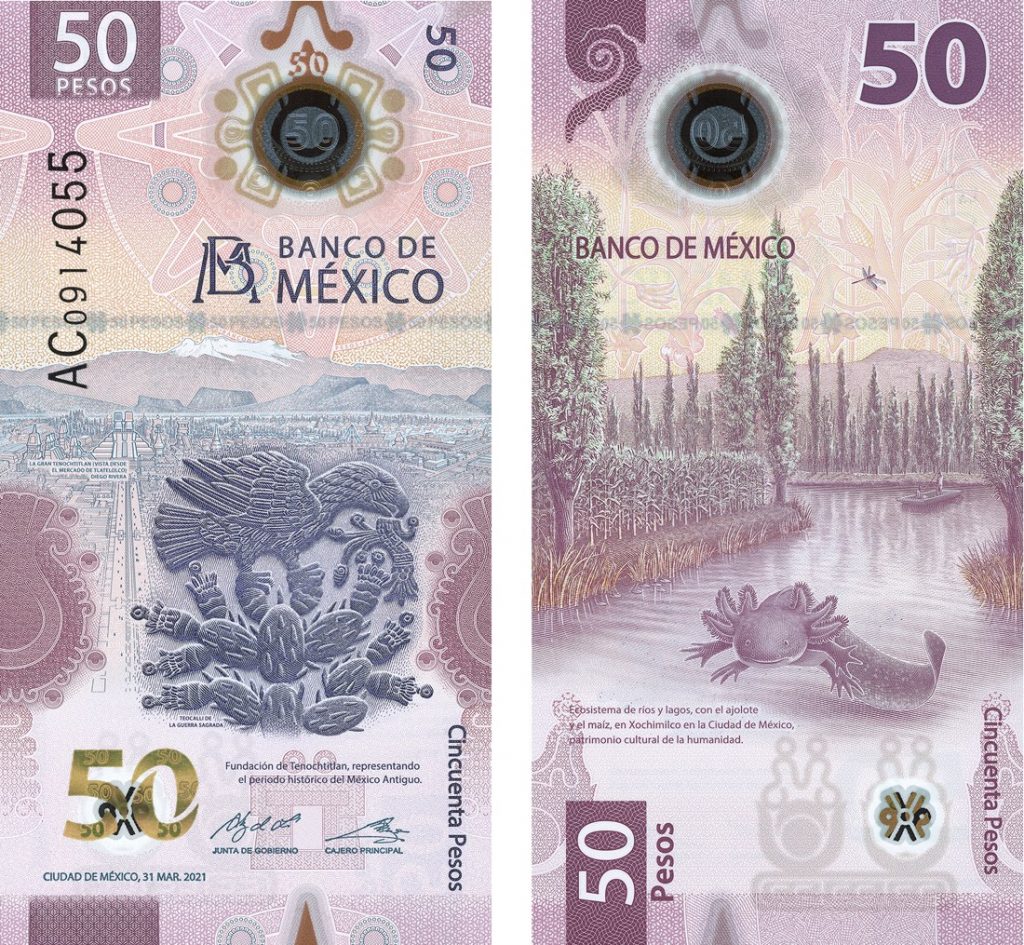 Other GUARDIAN polymer notes in the G-family issued by the bank – the 20 pesos and 100 pesos denominations – have been in circulation since 2021 and 2020 respectively.

The new design of the 50 peso incorporates a large, complex transparent window that features G-SWITCH™ and METALIX™ inks. The G-SWITCH security feature changes colour when a note is moved, or seen from a different angle. On the new 50 pesos note, the G-SWITCH ink changes from blue to gold, while the METALIX ink is copper coloured.

Other features include an integrated magnetic thread with the denomination of the note and a pre-Hispanics based design.

Another benefit of the new note is its environmental performance. The notes start life as polymer pellets which are transformed into Propanote™ Clarity C, a bank-grade polymer substrate film, used only for banknotes. Once the banknotes have completed their working life, they can be recycled by turning them back into polymer pellets. These are used for a wide range of products, including packing cages for fruits, and building materials. CCL Secure has a purpose-built recycling centre in Zacapu, in the Mexican state of Michoacán.

Once the latest G-family of notes is complete, it is estimated that polymer will be used in around 2 billion notes in circulation in the country. This represents around 30% of the total volume of notes in circulation. CCL Secure’s GUARDIAN, the world’s leading polymer substrate, is currently used in over 75 billion banknotes worldwide.