A Company Built On ‘Being Better’

Our company was born out of a central bank’s vision to “build a better banknote”.

That was in Australia, in 1988. Decades later our presence is now worldwide, but our goal remains the same: to create better banknotes using polymer substrate technology that is always evolving.

Soon after Australia converted to a decimal system of currency in the mid-1960s, the new A$10 note was counterfeited. Ultimately, this led to the concept of polymer banknotes with Optically Variable Devices (OVDs), researched by the Commonwealth Scientific and Industrial Research Organisation (CSIRO) in collaboration with Note Printing Australia (NPA).

The first practical polymer banknote substrate was GUARDIAN™, launched in Australia in 1988. The $10 note contained both the world’s first transparent window and first hologram, making it the most secure banknote of its time. With strong public support, the Reserve Bank of Australia introduced a A$5 note for general circulation in 1992 followed by successive notes in subsequent years.

Throughout the 1990s, the innovative GUARDIAN banknote substrate grew in popularity worldwide, gaining the confidence of more than 30 central banks. In 1996, the RBA and Innovia Films entered into a joint venture to create Securency International, dedicated to the production and development of GUARDIAN.

In 2013, Innovia acquired the RBA’s 50% share in the business, with the RBA proving to be an outstanding partner in helping Securency establish itself in the global banknote industry.

CCL Industries acquired Innovia Security in 2017 when we rebranded as CCL Secure. 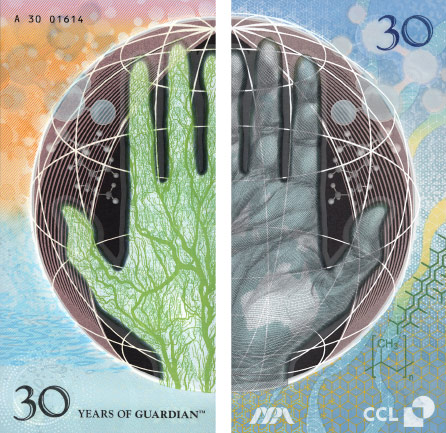