The Bank of England’s new £50 note, launched on 25th March, marks the transition of the full series of English notes to GUARDIAN™ polymer substrate. For CCL Secure, the makers of GUARDIAN, the launch marks the 11th time that a country has transitioned all its banknotes to polymer.

The launch of the new £50 note has been trailed on the Bank of England’s website and in social media for several months now, with emphasis on both the security features that are built into the note and the design, which features computing pioneer Alan Turing. 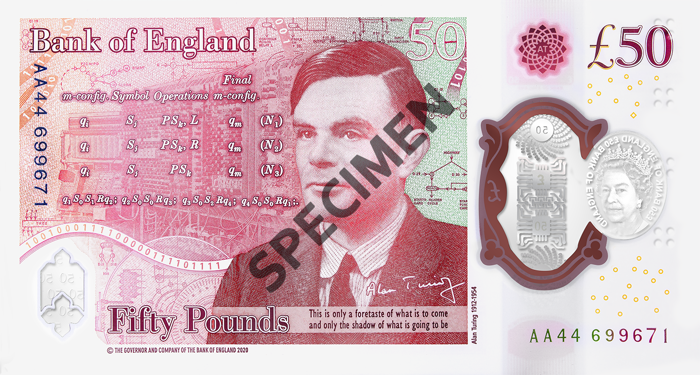 Turing provided the theoretical underpinnings for the modern computer via his work at the National Physical Laboratory and later at the University of Manchester. He’s also regarded as instrumental in the development of the theory of artificial intelligence, setting the ‘Turing Test’ to assess how successfully a machine can exhibit behaviours that are indistinguishable from a human.

As well as including an image of Turing, the note includes design elements that draw on his writings and other aspects of his work. Security features, many of which are achievable only with polymer substrate, include two windows and a two-colour foil, making it very difficult to counterfeit. There is also a hologram image which changes between the words ‘Fifty’ and ‘Pounds’ when tilting the note from side to side.

As part of their original contract with the Bank of England for the £5 and subsequent £10 and £20 notes, CCL Secure invested £40m in new production facilities at Wigton, Cumbria, creating 80 skilled jobs. The highly secure production facility makes a unique form of polymer banknote substrate – GUARDIAN – based on Propanote™ Clarity C film, which is also produced onsite by sister company Innovia Films. Propanote™ Clarity C is used solely for banknotes and no other purpose. Both companies are part of the CCL Industries Group.

The key features of the new £50 include: