The new, high value ₡ 20,000 polymer banknote is being issued by Costa Rica in time for the Christmas bonus season and is the latest denomination to be issued as the BCCR moves all of their notes to polymer. 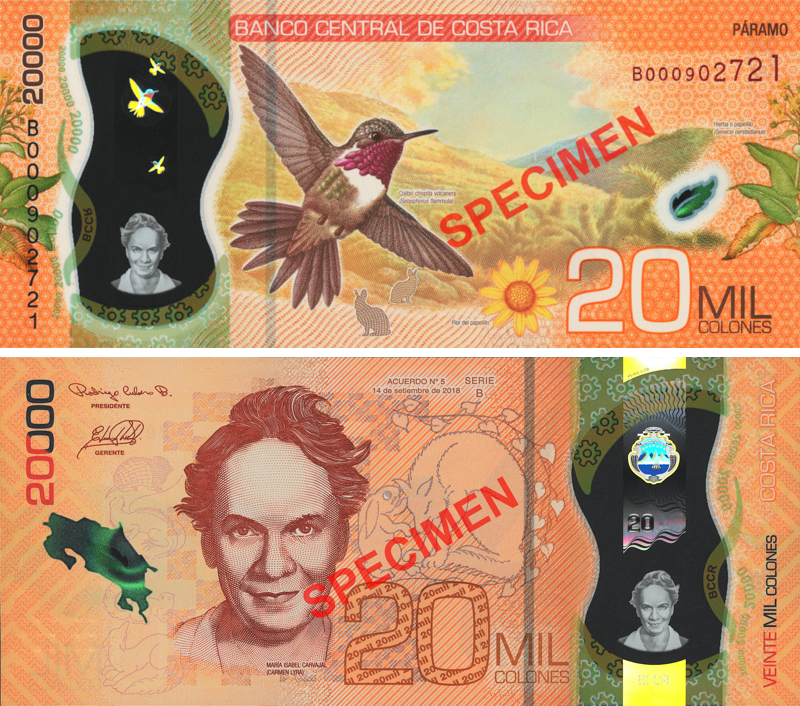 New ₡ 2,000 and ₡ 5,000 notes will come into circulation at the beginning of December to complete Costa Rica’s transition to polymer, joining the ₡ 1,000 and ₡ 10,000 denominations.

Before deciding to move to polymer the bank conducted an extensive analysis of the performance and cost of their lowest denomination in a direct comparison between cotton-based substrate and polymer. “The polymer denomination can stay in circulation 5 times longer and the cost savings in total were up to 74%,” the bank found.

The launch of the new notes was timed to enable ATM operators and users of other currency processing equipment time to check and adjust the calibrations of machinery, where necessary, to accept the new notes.

Key design characters, motifs, colours and sizes have been retained from previous paper versions, but with amendments to their design and the incorporation of new security measures that are possible only with polymer substrate. All five of the denominations incorporate a transparent window that is wider and more visible than the original feature found on the ₡ 1,000 note.

The GUARDIAN polymer substrate used in Costa Rica’s new notes is manufactured by CCL Secure. GUARDIAN is already used in over 60 countries worldwide, where more than 75 billion notes in more than 200 denominations are in circulation.

Since the world’s first polymer banknote was introduced in Australia in 1988, CCL Secure has become the world leader in polymer substrate for banknotes.