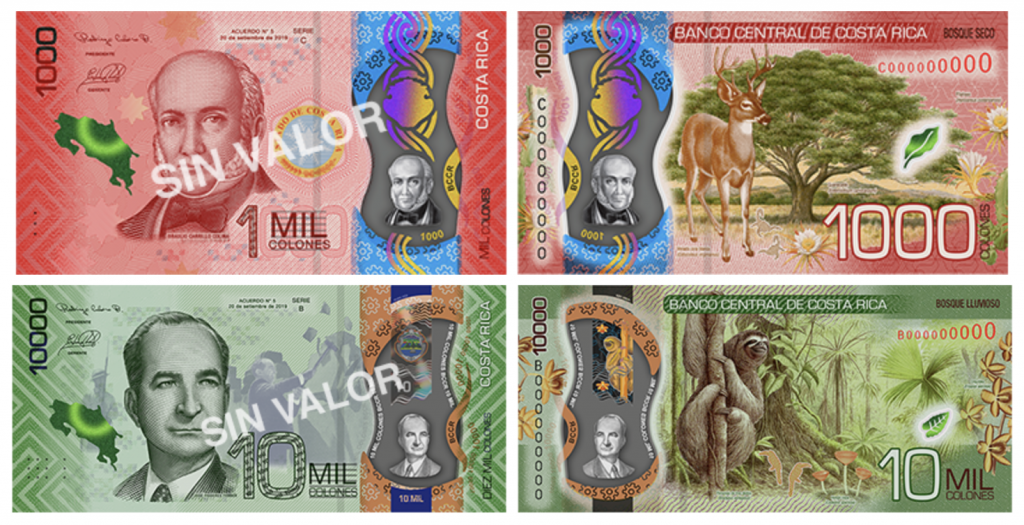 Before deciding to move to polymer the bank conducted an extensive analysis of the performance and cost of their lowest denomination in a direct comparison between cotton-based substrate and polymer.

An in-depth study of the impact of the new family of notes began with the introduction of the first polymer note in 2010, analysing durability, cost, benefit ratio, security aspects, internal processing impact & the experiences of other countries.

In a recent ‘Tipping Point’ seminar hosted by Reconnaissance and CCL Secure, BCCR’s Director of Currency, Marvin Alvarado Quesada, shared some of the survey results. Prior to 2010, the shortest life cycle was 10 – 12 months for the ₡1,000. Following the transition to polymer, the life of the note increased to 60 – 64 months. Cost savings were equally impressive, with BCCR saving up to 71% compared to paper.

Analysis by the BCCR also showed a significant reduction in counterfeits. In the ‘Tipping Point’ seminar, Mr. Quesada shared that between 2011 and 2021 no fake ₡1,000 banknotes had been detected, despite there being a very high volume of counterfeited banknotes back in 2009 and 2010, immediately prior to polymerisation.

When the transition to polymer began in 2010, the Costa Rican banknote family included four denominations, all of which were the same size. The uniform size made differentiation between the notes difficult for visually impaired people. An ancillary advantage of the move to polymer is that the new notes are in different sizes and use varied, high contrast colours. Security features have also been updated.